When reading the article Crunching 30 Years of NBA Data with MongoDB Aggregation I coulnd’t help but think that we’ve been enjoying aggregates in SQL for 3 or 4 decades already. When using PostgreSQL it’s even easy to actually add your own aggregates given the SQL command create aggregate.

The next step after thinking how obvious the queries written in the mentionned article would be to express in SQL was to actually load the data into PostgreSQL and write the aggregate queries, of course.

With the help of a little bit of Common Lisp code and using the mongo-cl-driver it was easy enough to parse the given BSON file. What was more complex was to actually understand enough of the data model to produce a relational design out of it, avoiding data redundancy as much as possible.

We call that step normalization in old-style relational databases, and the goal of that process is to avoid functional dependency so that the data is easier to understand, verify and process the data once loaded.

For instance, rather than have both scores from each team and a column won per team, which would be a boolean but is a number in the given BSON file, we store only the scores. Here’s the main table definition of the stats we are going to be playing with, the game table:

As much of the aggregates in the referenced article are playing with statistics from teams who actually won the game, let’s create a view to simplify our SQL queries thereafter:

If you’re not doing much SQL, remember that creating such a view is common practice in the relational world.

Now that we have the extra useful view, it’s possible to implement the first MongoDB query in SQL. First, let’s have a look at the MongoDB query:

I don’t know about you, but I have quite a hard time deciphering what that query is actually doing, and when the explanation text talks about using a 6-stage pipeline my understanding is that the application developper has been writing the execution plan of the query here. Let’s ignore the query format itself, as it’s obviously meant to be generated by a tool rather than typed by a human being.

Here’s the same query in SQL, with the result this time:

What we have here is a pretty basic query using a join, a where clause to restrict the data set we are playing with, a group by clause to define which data to compute the aggregates against, with an order by and a limit clause for presenting the result. To be realistic, if you’ve ever done any SQL at all, then you know how to read that query because you’ve been writing dozens of similar ones.

Here’s, as in the original article, the same query against a much larger data set this time, with all games of the 2000s decade:

The goal here is to compute how often a team wins when they record more defensive rebounds than their opponent across the entire data set.

To be able to compute the percentage, we have to have a count of all registered games, of course. Then we are going to count how many times the winner team registered a greater team_stats.drb than the loser, and count how many times in SQL is usually written as a sum(case when <condition> then 1 else 0 end), which is what we’re doing here:

We note here than in the original MongoDB article the aggregation query is short of computing the percentage directly, apparently it’s been done in the client tool, maybe using a spreadsheet application or something. 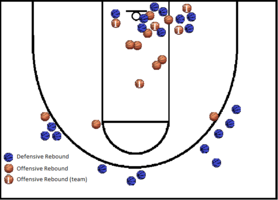 Next, still following on our inspirational article Crunching 30 Years of NBA Data with MongoDB Aggregation, we’re going to compute what percentage of the time a team wins as a function of the number of defensive rebounds they recorded.

I’m not sure I understand what they achieve with averaging ones when a team wins and zero when a team loses, so I couldn’t quite reproduce their result. Here’s an approaching query tho:

I only pasted the first few lines of the result because I’m not sure how to make sense of it, really.

What I find most interesting in the following factoid proposed in the MongoDB article is the complete lack of the query you need to run in order to grab the matching data:

An interesting factoid: the team that recorded the fewest defensive rebounds in a win was the 1995-96 Toronto Raptors, who beat the Milwaukee Bucks 93-87 on 12/26/1995 despite recording only 14 defensive rebounds.

When doing the necessary query in SQL, using a Common Table Expression (the WITH syntax) and a Window Function for good measure, we get actually 4 different games with the minimum defensive rebounds in our history of NBA games, 14:

To understand all there’s to know about window functions, have a look at my article on the topic: Understanding Window Functions.

The next interesting aside is the following:

Which we translate in SQL as the following query:

Again it’s easy enough in SQL to have more details about the aside presented in our source article, and we get a slightly different story.

It’s quite hard for me to appreciate the work done in the MongoDB aggregation framework really, when we’ve been enjoying advanced aggregation and statistics in PostgreSQL for a very long time. With the addition of Window Functions and Aggregate Functions for Statistics it’s possible to implement advanced analysis right into your SQL queries.

When the problem you have to solve involves analyzing data, one of the more advanced tooling you can find around certainly is the SQL language, in particular its implementation in PostgreSQL!