This year’s FOSDEM has been a great edition, in particular the FOSDEM PGDAY 2013 was a great way to begin a 3 days marathon of talking about PostgreSQL with people not only from our community but also from plenty other Open Source communities too: users!

PostgreSQL at FOSDEM made for a great event

Having had the opportunity to meet more people from those other development communities, I really think we should go and reach for them in their own conferences. About any PostgreSQL community member I’ve been talking about with about that idea seemed to agree and generally already was thinking the same thing. And most are already doing it, in fact…

I had the pleasure to run two conferences there, both in the PostgreSQL devroom.

I’m currently in the middle of implementing Event Triggers for PostgreSQL and I have been for about the last 2 years. It’s a quite complex feature to get right and so the patch itself is complex and large, which means the reviewing process is complex and takes time.

That also means that some parts of the design have already been redone completely at least 3 times, and that what got commited to the PostgreSQL code is nothing like what the design we decided should go in looks like. That’s just a fact of life, maybe, but that makes for a very long development process.

We’re now getting to the end of it though, and this talk is showing both where we want to go with Event Triggers, where we are now and what remains to be done for 9.3 if we want the feature to be any useful.

If you’re interested into that development, have a look at the slide deck and possibly ask me some questions about what’s not clear on the pgsql-hackers mailing list (preferably). 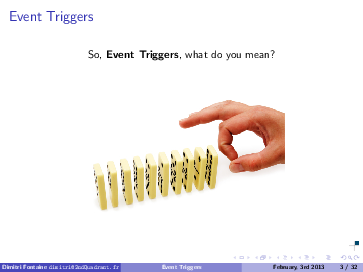 You will see that while a lot has been done (internal refactoring, adding new infrastructure and SQL level commands, and the minimum PLpgSQL support); a lot remains to be done where the code has already been submitted several times, following several designs directions given by careful review on hackers, and still we have some choices to make.

This talk is showing several ways to implement High Availability with PostgreSQL. The fact is that that term is overloaded already, and usually covers two very different things which are Service Availability and Data Availability.

In the talk, we’re showing up several techniques that you can use to address different set of compromises in between scaling, load balancing, data availability and durability, and service availability. The first two points could seem unrelated to the main topic, but scaling often is a simple enough way to achieve service availability… until you need to think about sharding, that is.

Implementing High Availability of Services and Data with PostgreSQL

So the talk is all about making compromises in between them and getting to an architecture able to implement the choosen compromises. While the talk has been pretty well received, it was delivered in a 50 mins slot where we usually take a whole day or three when addressing that problems at a customer’s site.

Some parts of how to get to the right architecture for the compromises that are important for you can’t be fully covered in that time slot, while still being able to actually present the techniques that we’re using.

I think it might be useful to extract a single use-case or two from that talk then have a full 50 mins version reduced to a single or a couple of very clear compromises and how to achieve them in details, rather than trying to present a full range of techniques and how to use them in different scenarios.

After having been talking with many people, it appears that for next year’s edition I should be proposing a more general talk that aims at helping developpers in other communities (python, ruby, etc) discover what’s in for them in PostgreSQL. This database is full of advanced features that are really easy to use, and the only problem when preparing such a talk is choosing the right subset…

If you’re running a local developper user group and are interested into learning some more about how PostgreSQL can help you in a daily basis, please do get in touch with me and let’s schedule a presentation together!