As Guillaume says, we’ve been enjoying a great evening conference in Lyon 2 days ago, presenting PostgreSQL to developers. He did the first hour presenting the project and the main things you want to know to start using PostgreSQL in production, then I took the opportunity to be talking to developers to show off some SQL. 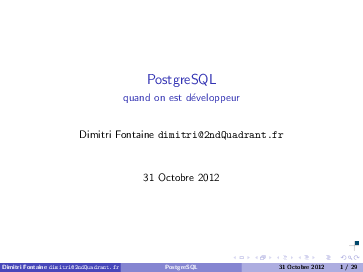 That slide deck contains mainly SQL language, but some french too, rather than english. Sorry for the inconvenience if that’s not something you can read. Get me to talk at an english developer friendly conference and I’ll translate it for you! :)

The aim of that talk is to have people think about SQL as a real asset in their development tool set. SQL really should get compared to your application development language rather than your UI formating language, it’s more like PHP or Python than it is like HTML.

So the whole talk is about showing off some advanced SQL features, all provided by default in released PostgreSQL versions. The main parts of the talk all come from an article in this blog: Reset Counter.