Last week I had the pleasure to present two talks at the awesome PostgreSQL Conference Europe. The first one was actually a tutorial about Writing & using Postgres Extensions where we spent 3 hours on what are PostgreSQL Extensions, what you can expect from them, and how to develop a new one. Then I also had the opportunity to present the new version of pgloader in a talk about Migrating from MySQL to PostgreSQL.

This slide set is a series of almost one hundred SQL queries against real life data sets to show off some nice use cases where PostgreSQL Extensions are useful. 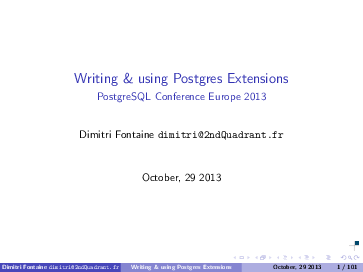 Dive into PostgreSQL Extensions, with detailed use cases

From MySQL to PostgreSQL with pgloader

This talk present the challenge of migrating your data from MySQL to PostgreSQL, where they are protected against malicious abuse of all sorts. Also goes at lengths to present pgloader 3.1 which is going to be the new version of pgloader, to be realeased soon, and announced here. 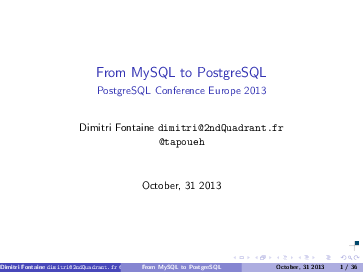 How to migrate to MySQL using pgloader… and why

If you’ve never been that conference, just realise how awesome it is. Spending a full week with smart people who want to have good times together, talking about either your own use case for PostgreSQL and giving away free advices (read as free consulting too), or talking about the innards of PostgreSQL in any level of details.

The conference runs in a different European city each year, we made it in Prato, Italy, then Paris, France, then Stuttgart, Germany, then Amsterdam, Netherlands, then Prague, Check Republic, and this time it was in Dublin, Ireland. Who know where we’re joining next year… will you be there?

Also, as announced in the lightning talks series, the IRILL french organisation about Research and Innovation on Free Software has agreed on principle to host the PostgreSQL User Group in Paris. I’m soon to pick a date with them for our first event, stay tuned!